I am going to start off this post by telling you about two photographs. Of all the work that I have viewed and thought about, these two photographs disturb me. I actually hate these photographs, and the term hate is a pretty strong word, but to me, I think that is necessary. I am going to talk about my views, and quoted stories behind them by Mr. Witkin. I researched these images, and I could not find the stories behind them. That is all I really wanted to know. The stories. 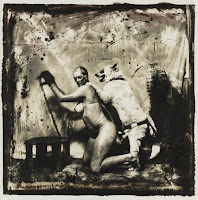 "Eunuch" is about the stupidity of beastiality. I made the drawing and then found the models (the dog had to be a light colored large dog). I showed my sketch and explained my concept to the owner of the dog and a week later to the man who was to be penetrated by the dog. The set was ready, and the dildo for the dog was made. (I made it) Both men arrived for the photograph. They turned out to be ex-lovers. Even the dog knew it! I calmed them all down and asked them to forget all that and do the shot. They agreed.

I was at the camera quickly composing then focusing the image. I then adjusted †he masks and positioned the head of the kneeling man. I then got behind the camera to take the shot. At that very moment, the dogs’ owner pushed the dogs dildo into the masked man. The dog smiled and the kneeling man's expression was perfect. That was the shot. I didn't need to take more. It had already occurred in time. We all were very excited and happy. The two men walked out of the studio holding hands. The dog ran beside them still wearing his mask. I printed the negative. I already knew that I would obliterate the figure of the dog owner. It took several hours to make the master print. I felt happy and honored to have helped create this image, an image reflecting states of mind and an aesthetic of chance." 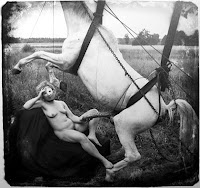 (click thumbnail for larger image)
A Day in the Country, 1998


“About an hour before landing in Berlin to begin a three month residency, I had an idea. I made a sketch of it on a paper napkin. I knew I would make a photograph of this concept during my time in Germany. The idea was of a nude masked woman contemplating sex with a horse. Touchdown.

It took me a month and a half before I gave up the idea of doing this shot in Berlin. Instead, I asked the model for this shot (she was Polish) if she knew of a place in Poland where I could make this photograph. She told me she came from a town in Poland not far from the German border. In a week, arrangements were made for me to photograph near a slaughter house in her home town. There would be a crane to hoist the dead horse ( a white one) who had been killed for slaughter. It took me a week to make a dildo for the horse and buy steel cables and some rope to lift the horse with the crane.

The model, my German translator and my assistant crossed into Poland at 6 AM. Two hours later we hoisted the dead horse into position and attached the erect penis. The light was soft. I told the model to strip after I adjusted the black velvet on which she would recline. The camera was already set as was the light reading. I focused, set the lens and shutter and began to direct the model. Then it began to rain torrentially. We all took cover. I observed that the rain was making the dead horse's body hair cling to its bones and form. The rain had made beautiful forms with the mud and its hoofs glistened in the rain. The rain stopped as suddenly as it had begun. I told my assistant to remove the tarp covering the black velvet. I set up the camera land posed the model. The light was shimmering and clear. My assistant handed me my light meter. I took the reading and set the camera controls. The masked model, bless her heart, coyly got into her pose. Her attitude was perfect. I shot one roll of film on my Pentax 6x7. I had the image. From mind to matter and now to film-that journey had ended. But it was to be finalized when I got home to process the film and make the final emotion of all this effort-the print.”

What made him want to create two photographs like these in the first place?

I could not find the stories about the photographs, and so I made contact by phone. I found his number from WhitePages (online phone directory), and contacted him. I told him I wanted to ask him a few questions about his work by email as we both have busy lives, and he gave me his email address. There was no turning back, so I emailed him the following week, and one week later he emailed me the stories behind the photographs. I finally knew, and I was shocked.

Now, did he create these images, to shock people, or was it to show how we are sometimes confused by love?

ISSUE NUMBER ONE:
Is it considered love when we have sexual relations with an animal? No.

Here is my reason why.

When a person is having sexual relations with an animal, they are only taking advantage of that particular animal. They do not understand the concept of right or wrong, and an animal only has a certain level of intelligence. I believe that sexual contact requires consent, and it’s not like they can tell us that they do, or do not want to participate. Also, in my opinion I see it as a form of animal abuse.

Who am I to judge though? Even though I think it is wrong to have sexual relations with an animal, I have been judged way too many times to even start thinking of judging other people.

ISSUE NUMBER TWO:
These two images are very degrading to women. People should always be above animal, no matter what kind of animal it is.

The man (with attached breasts on a string) in “Eunuch” is being portrayed as a woman. Why have the breasts on him in the first place? The woman is below the dog. Why not let us view him as a man?

Here is his statement.

"Both these images relate to our failure to understand human and sexual union. The sacred commitment of love expressed as one-flesh has been corrupted to the lowest level of pornography. In "Eunuch" and in "Day in the Country", this corruption is also expressed as social nihilism and of our confusion to love."

Well, there you have it. Some humans apparently have a different approach to what love is. Are these images considered pornography? Only you, the viewer, can decide that.
Posted by Amanda Brunner at 5:06 PM