According to a book review written by Elizabeth Young, Joel-Peter Wtikin has been compared to many photographers, and many still believe he is the “most controversial photographer in the world.” I find that hard to believe when you have the Neo-Symbolist photographer John Santerineross out in the world making photographs that some, including myself, find even more controversial.

If Witkin and Santerineross have not been compared, they should.

Witkin was raised in a religious home with parents that had different religious beliefs. Growing up, I can imagine being pulled back and forth—butting heads, when it came to what his parents wanted him to believe in. Because he experienced that, I am sure it created tension in the home environment. Due to living like that, I understand how religion influences his photography work. He grew up with a Jewish father, and a Roman Catholic mother.

On the other hand, You have Santerineross whose “aesthetic is derived from a mix of his exposure to Catholicism and Santeria as a child.”

What is the different between both photographers?

Witkin’s photograph’s may contain men and women who showcase their physical abnormalities, different sexual fetishes, and pain they may go through, but he is photographing them in a way that does not degrade the men and women who are his subjects. Even though he may show their pain, he always shows their beauty. “The people in all of his images were myself,” –Joel Witkin.

What does he mean by that quote?

Witkin identifies as a freak, as a person who has endured pain, and that is why he relates to his subjects. He may have gone though similar situations as his subjects. As a child, he may have felt like a social outcast, and he probably has been socially ostracized growing up. He continues to be socially ostracized because of the photography work that he creates. He does not mind, because he is proud of the work he creates, as I am proud of the work I create.

But, like myself, we both wish we could be accepted by the vast majority.

On the other hand, Santerineross shows pain. The photographs depict women, not as women, but as objects for men to look at. He does not relate to his subject matter, which consist of women. Of the photographs that I have seen, they contain women who are bound, nude, blindfolded, and helpless; now let’s talk about degrading women.

According to some from the article written by Elizabeth Young, Witkin has also been described as a demon and “another Jeffrey Dahmer,” which is completely ludicrous, but Santerineross is not? From taking photographs of women who are bound, nude, blindfolded, and helpless, he exploits them. In my book, that is only one stop away from rape and then murder. 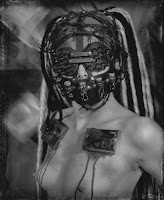 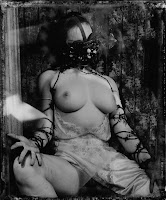 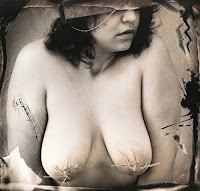 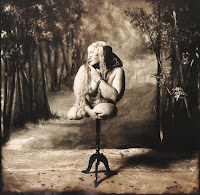 
See the difference?
Posted by Amanda Brunner at 8:40 PM